If a lolita wears an outfit and does not post it online, are they actually a lolita?

Safe to say, photo evidence of lolitas either out and about or flaunting our shopping hauls is the most common way of connecting with other lolitas. So much so that some see it as a crucial part of dressing in the fashion. How come?

These are the main contemporary cultural contexts of the early '00s that I think about when answering this question:

When lolitas outside of Japan, mainly North America and Europe, found like-minded peers on mailing lists and Livejournal in the early 00's the fashion was considered somewhat hard to attain. Not to mention somewhat of a challenge to fit into one's existing daily wardrobe. By the time that daily_lolita emerged only a very few Japanese brands had started to acknowledge international customers and lolitas knew of at least one person in their vicinity that owned a digital camera. This was where it all took off.

The main point of daily_lolita was to showcase the outfits you wore while going about in your everyday life. It was a reaction to the then-common view on lolita being so expensive and special as a fashion that it only found it's place on special occasions, like photoshoots or meetups. Daily_lolita wanted to help by inspiring you to make the most out of your expensive clothing by trying to wear it as much as possible.

Most of the posting in daily_lolita was done by lolitas that could afford brand, could wear brand and/or owned a digital camera. But most importantly they had an occupation or daily activities that allowed, enabled or encouraged casual or creative fashion.

Daily_lolita photos basically became the main inspirational source for non-Japanese lolitas outside of the Bibles and the brands' own photoshoots. Through these photos, there was proof that yes, lolitas do exist, and yes, there is a world where you can wear the fashion as often as you want.

As sharing photos online got easier, the lolita community spiraled into centering around a Descartesque way of thinking: "I post, therefore I am". Nowadays the fashion is well known enough to have regular meetups and international events. The level of ambitiousness put into coords is getting deeper and the level of what is considered casual has adapted. As a result, most photos of lolitas online are well thought out and planned ahead when it comes to the outfit and very much when it comes to the surroundings in which the photo is taken.

So the photos we are used to seeing of lolitas today are much like well-composed artworks: depictions of someone's reality in a certain slice of mind and time. Posting your outfit online is a part of lolita fashion, hardly crucial though since there is so much more to the fashion than that.
By M ♥ kl. 15:51 2 comments: 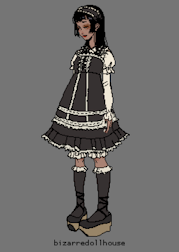